Studies show that one of the biggest contributing factors to arguments in a marriage is the subject of money.  It can make people who are normally completely calm turn into stressed out ogres and the most positive of people suddenly believe that the world is coming to an end. 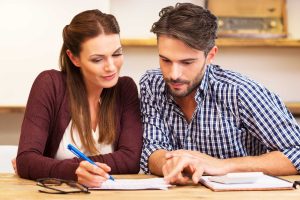 Rather than becoming a victim to the statistic of divorce, here are some of the best ways to avoid arguing over money with your spouse.

Even though marriage is about unity and coming together as one rather than separate entities, there can be certain aspects of your relationship which may be better off as separate from each other.  Most often, this is the case with money.

Having a joint credit card or bank account can take away a certain amount of independence that many people value.  If you see your spouse’s purchases and feel inclined to nag at them about what they are spending their money on if you feel it is frivolous spending, this can be a recipe for disaster.

Avoid this kind of quarreling altogether and consider getting separate accounts.

Create a Budget Together

Sitting down and coming up with a list of what you need to spend your money on each month is a great way to break down costs and decide what you both agree should be spent on food, utilities, and things like rent.  Once you break down the bills you can move on to how much you feel would be an appropriate amount on personal luxuries.

If you can agree on a number and incorporate it into your lifestyles rather than it being an unspoken subject, you can avoid a fight altogether.

Deciding on how much each of you should spend on expenses is a great way to make things fair and even. Some people decide to go straight down the middle on expenses, while others pick and choose a la carte what to pay for since one spouse’s salary may be greater or less than the other.

Be Patient With Each Other

Above all, the best way to avoid arguing is to remain patient at all times.  Marriage is a lot of work and you won’t always agree.  But by slowing down and trying to be patient you can work through most marital issues.